Home > Fashion History: What happened to fashion in the 1940s? 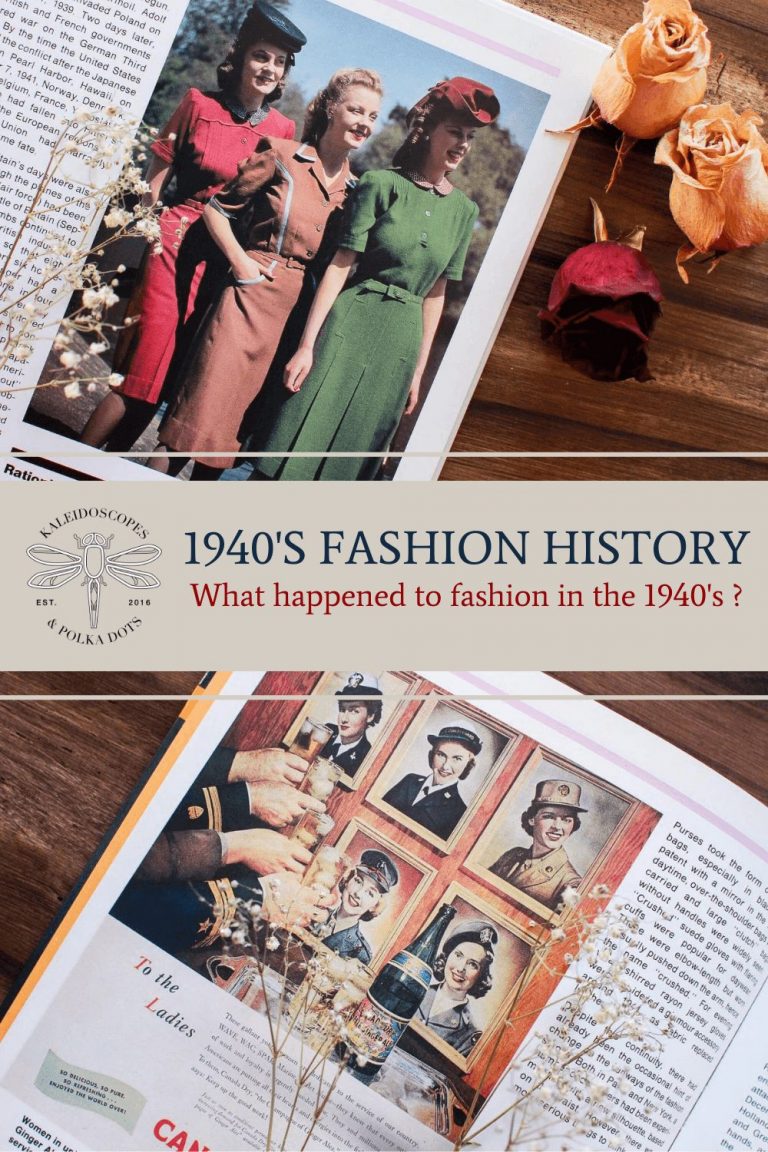 “Fashion is not an island; it is a response.”

Can you imagine a world where fashion trends are directly influenced by government regulations? This might sound like something out of a dystopian novel but that was reality for anyone who lived in the 1940s.

Fashion trends of the 1940s were strongly influenced by WWII via government regulations, & rationing. This was true for both The Allies (France, America, Britain, & The Soviet Union) & The Axis Powers (Japan, Italy, & Germany).

Resources from both sides, that were generally used to produce consumer goods, were redirected to assist the war effort.

The effect this had on fashion resulted in “make do and mend” ingenuity by the general population; the creation of a collection of timeless silhouettes that closly aligne with regulations established by governments; and a varied assortment of novelty jewelry prints and color.

As stated so eloquently by Amanda Hallay, “fashion is a response.”

In the 1940s the world responded by making the most with what was allotted and, in the case of American designers, taking the reins and establishing fashionable trends that made the most of the world around. (*Fashions of A Decade – The 1940s by Patricia Baker, 1992)

In June of 1940, Germany occupied Paris, who at the time, as it is today, was the center of the fashion world. Fortunately, Paris fashion houses were permitted to continue working throughout the war with the assistance of his leader, Lucien Lelong. (*Fashions of A Decade – The 1940s by Patricia Baker, 1992)

This event prompted a dramatic shift in the fashion industry. For the first time in history, American designers took on the roles of trend setters.

American journalists in search of talent quickly realized that there were a number of talented American designers who’s work was amazing.

SIGN UP TO BE THE FIRST TO KNOW WHEN A NEW BLOG IS PUBLISHED!

*Please note that all the books in this slide, and links included throughout the blog marked with an asterisks (*) , direct you to affiliate links where I make a small commission if you place an order.

Claire McCardell is one example. She was one of the most successful American designers of the time. Her style aesthetic naturally placed utility and practicality at the forefront of her designs, hence government regulations on clothing played to her advantage.

She is well known for her pullover dress.

Pictured below is a practical resort-wear ensemble with interchangable halter top and skirt designed by Claire McCardell.

Fashions of the 1940s reflected strong and empowered utility pieces as well as bold and lively ensembles. The dichotomy is representative of the sentiments of the time which visually may seem to clash but the spirit of each was strongly aligned with the other – winning the war and the hope of a better tomorrow.

Men were being summoned for duty and, for the first time in history, women were catapulted into the workforce with great enthusiasms.

These changes meant that lavish, delicately adorned garments could no longer be readily produced or purchased. Instead, mending to make do – a popular marketing campaign originally made popular during The Great War was reintroduced in Britain –  was in fashion.

There was much to lose unless great and vast sacrifices were made, and new ideologies embraced and implemented.

I find it unimaginable to picture life under those circumstances of severe restriction and the unthinkable pressure of world events while sacrificing so much.

This is the year of The Rat according to the Chinese zodiac.

The Rat is known for it’s vitality, wit and flexibility – all of which we’ve experienced as a nation in one form or another this year.

It is the year we rose as a nation to demand equality and justice against racism.

It is the first year, in my life, that I have ever personally experienced a lack of grocery products – especially eggs, bread, water, paper towels, hand sanitizer, and toilet paper.

These shortages triggered something in me, and in many around the world, we hadn’t experienced before. A panic that there may not be enough to go around.

Thankfully though, this is very much an anomaly and not a byproduct of the world being at war. It is a response to COVI-19, a pandemic we will have to continuously fight against to minimize its effects.

While we continue to experience dramatic changes to our way of life due to this most serious issue, our fashion industry hasn’t really affected – unless you count the addition of face masks. (Many now treat them as a fashion accessory.)

We have yet to see where this journey ends (today is August 18th, 2020), I am hopeful that soon enough the world will return to a less aggravated state and that hand sanitizer and paper towels will be readily available once again.

Beyond COVID-19, I have witnessed the horrifying events of 9/11 and all the good and bad that came in its aftermath.

I am a part of a generation that embraced the beauty of social media. I have also felt its destructive effects.

All-in-all, I am so happy to be a part of the imperfect world as we know it today. However it leads me to wonder, would I be able to withstand the circumstances presented to me in the 1940s?

Without a doubt. There truly would not have been another option.

The strength and ingenuity of that generation is what draws me to this era. It is the inspiration for this blog.

As  briefly noted earlier, fashion in the 1940s was greatly influenced by regulations implemented by governments.

Governments all over the world sought to direct all essential resources to providing tools for the war effort instead of creating consumer goods.

For example silk. In the 1940s women’s silk stockings were considered nonessential given that silk was already in short supply and this material was used to create parachutes, maps and other wartime tools. As noted by The Vintage News, manufacturers then turned to nylon and later to cotton and rayon to produce stockings.

To better understand how and why it is that government got so involved in the fashion industry during the 1940s, I wanted to go through a brief timeline.

A Snaptshot of 1940s History

June, Paris is occupied by the German Army and essentially cut off from from outside influences

December 7 – Attack on Pearl Harbor –  The U.S. immediately declares war on Japan and  enters the war on December 11

The U.S. government establishes clothing restrictions under the L-85 Order

The goals of this order were as follows:

In response, British & American governments ban wide-scale media coverage of the Paris designs due to their disregard for government regulations

Balenciaga drops the hemline to 15 inches off the ground

The Marshall Plan, otherwise known as The European Recovery Program is enacted in The United States

Amanda Hallay (Mastermind Of The Ultimate Fashion History/Fashion PHD Expert/Ultimate Fashion Bada$$) has created a wonderful collection of videos on the topic of 1940s fashion I think you’d very much enjoy.

The Ultimate Fashion History: The 1940s

In response to restrictions set forth by governments across the world, accessories from the early 1940s were generally bold and affordable.

In the spirit of make do and mend, many were made from recycled materials.

For example, military insignia from loved ones was transformed into delicate brooches, bracelets, or necklaces. This type of jewelry is known as Sweetheart Jewelry.

Precious stones were inaccessible hence novelty jewelry was made to look like precious stones. Such pieces were made from plastic, glass, or Bakelite – a mixture of phenol and formaldehyde. (Vintage Jewelry design, classics to collect and wear by Caroline Cox, page 86)

Presently we consider shoes to be accessories that we use to enhance our outfits of the day (OOTD). This is, of course, because we do not have any restrictions on the materials used to create our shoes.

For those that lived in the 1940s, shoes were treated, yes as an accessory of sorts, but mostly as a necessity.

With women being asked to go to work, sensible shoes they could wear all day long were a must. Yet, because of rationing and a shortage of rubber, shoes were often made with alternative materials, many of which were not comfortable -i.e. wooden soles.

“In both Germany & France cobblers had a backlog of shoes in need of resoling…Many cobblers salvaged tires to make rubber soles, and a brisk business was made of adding metal tops lifts and plates to heels and toes of walking shoes still in good condition, in an attempt to preserve their leather soles. “

Rationing began almost as soon as the war began, however, initially it didn’t include the rationing of clothing.

Before the fall of France in June 1940, rationing of British civilian supplies had been minimal; but imports did not meet civilian demand, and supplies were dwindling. The national resources would need to be thriftily managed to ensure a secure supply of food, fuel, and clothing for every citizen.

On 1 June 1941 a rationing plan was introduced that had been developed by the Board of Trade earlier that year. A coupon system meant that both cash and coupons were required for the purchase of each item of clothing.

This rationing plan meant that working class women had to make do with less given that merchants had to increase their prices to stay in business. According to Forties Fashion from Siren Suites to New Look by Jonathan Walford, between September 1939 and May 1941, the price of clothing more than doubled.

While the purchase of new garments was not an option for many, they turned to sewing and creating their own clothing. This practice not only fully embraced the “make do and mend” philosophy, but it also saved on ration coupons given that  a number of sewing tools were not rationed.

The United States declared war on Japan on December 8th, 1942 and officially entered the war on December 11th, 1942.

In the spring of 1942, the War Production Board (WPB) and its subsidiary, the Civilian Production Administration (CPA), issued a series of rules for the garment industry that were identified by a number preceded by the letter L, for Limitation Order. Women’s clothing was covered by L-85. (*Forties Fashion From Siren Suits to the New Look by Jonathan Walford, Page 67)

These restrictions brought about:

The popover dress – an affordable utility style dress designed by the ever fashionable and practical American fashion designer, Claire McCardell. At the time, it sold for only $6.95 (LoveToKnow, Claire McCardel By Kohle Yohannan).

It was specifically designed to accommodate the needs of domestic work – from gardening to baking (it even included an attached oven mitt).

On May 8th, 1945, Germany formally surrendered its armed forces to the Allies in Europe.

To celebrate this incredible feat, restrictions on red, white and blue bunting – festive decorations made of fabric – were lifted for one month. However, clothing rationing in Europe would remain in effect until March 15th, 1949, while in the United States clothing restrictions were lifted almost immediately following the end of the  war.   (Forties Fashion From Siren Suits to the New Look by Jonathan Walford, Page 42)

Living in the 1940s was clearly one of the hardest eras to live through and one of the most remarkable in terms of fashion history. There are so many beautiful designs and innovations that speak to my soul.

Most notably to me, Utility Fashion. I absolutely love this style. There is great power in simplicity and I think this type of fashion perfectly emulates this era.

Hopefully in the near future I’ll learn to sew and recreate one of these stunning pieces for myself. When that day comes you can be sure that I’ll document the process on my YouTube Channel.

What do you love most or find most interesting about 1940s fashion? 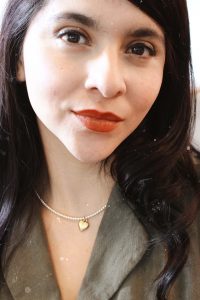 If you have any questions about this article, or anything at all, please reach out to me at sincerely@kaleidoscopesandpolkadots.com